There’s a Snake in My House! How to Remove Wild Snakes from Your Home Safely 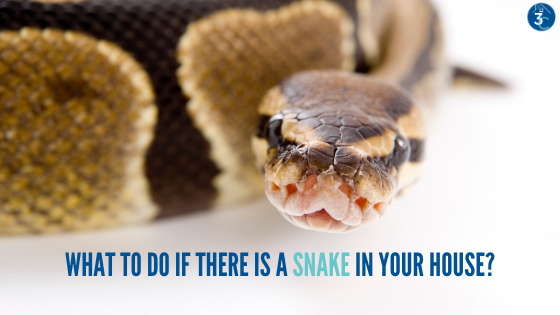 In Houston, sometimes the fall and winter months can be quite chilly. Some snakes that live near your property may see your warm home as a sweet spot to thermoregulate.

You may also find snakes in your home if you’re dealing with a rodent problem, which should be taken care of by a professional pest control specialist immediately.

So, what methods of snake removal can the average homeowner use? Let’s take a look at some standard practices.

What To Do If There Is a Snake in Your House

It’s essential to note that if a snake has the appearance of common venomous snakes in the Houston area, you should NOT attempt to remove it alone. We’ll cover this more towards the end of our guide.

One common practice for getting rid of a rat snake or garter snake is to sweep it out. This tactic involves sweeping the snake with a broom into a sealable bucket. Snakes can bite when frightened or irritated, so always use caution and use a very long brush or snake hook.

Snakes enjoy feeling safe and having access to hiding places. You can lure a snake out from the undesired area by putting a slightly damp burlap bag in a dark and warm space.

You can monitor the snake, and once it is in the bag, tie it up and reintroduce the snake to its habitat away from your home.

3. Pick it up and move it (with extreme caution)

The garter snake and rat snake, which are two common harmless snakes native to the Southwest, can often be handled by hand. This would involve wearing long gloves, picking up the snake from the middle of its body, and relocating it outside.

This is a common practice for homeowners who live in areas where these harmless snakes are common.

However, this should not always be attempted. If you live in the Houston area, this may not be worth the risk. Some common snakes found in Texas include the Western diamondback rattlesnake, the cottonmouth rattlesnake, the Texas coral snake, among many others.

Since there are many venomous snakes in Houston, the risk involved with misidentifying a snake could be deadly. If you believe that the snake in your home is venomous, absolutely do not attempt to interact with it and call a professional.

While we’ve covered some ways to remove snakes without the need for an exterminator, the risk may outweigh the cost-effectiveness. Because of the population of venomous snakes in Houston, one should strongly consider vacating the home and calling an exterminator or snake removal service immediately.

Harmless snakes like garter snakes are pretty easy to identify. However, some non-venomous snakes and venomous snakes look very similar. Consider the risk involved when handling a snake alone.

Who Can I Call to Get Rid of a Snake in My Home?

If you have a snake in your home in the Houston area and have any suspicion that it could be dangerous, it’s time to call Third Coast Home and Commercial Services.

We offer a variety of snake removal services and will make it a priority to get a specialist to your home as quickly as possible.

Ready for a free inspection? Call us today!

What do you think about our snake removal methods? Tell us about how you’ve dealt with uninvited snakes in your home in the comments below.

This website uses cookies to improve your experience while you navigate through the website. Out of these cookies, the cookies that are categorized as necessary are stored on your browser as they are essential for the working of basic functionalities of the website. We also use third-party cookies that help us analyze and understand how you use this website. These cookies will be stored in your browser only with your consent. You also have the option to opt-out of these cookies. But opting out of some of these cookies may have an effect on your browsing experience.
Necessary Always Enabled
Necessary cookies are absolutely essential for the website to function properly. This category only includes cookies that ensures basic functionalities and security features of the website. These cookies do not store any personal information.
Non-necessary
Any cookies that may not be particularly necessary for the website to function and is used specifically to collect user personal data via analytics, ads, other embedded contents are termed as non-necessary cookies. It is mandatory to procure user consent prior to running these cookies on your website.
SAVE & ACCEPT

Or Request Your Inspection Appointment:

Use the form below and we will give you a call in the next 24 hours to confirm your Inspection Appointment.